From Cosmoteer Wiki
Jump to navigation Jump to search

Build, fight, and scavenge to become a legendary Cosmoteer whilst exploring a galaxy.

Career Mode is the main game mode of Cosmoteer, and largely involves exploring the galaxy and completing resources in order to build the most powerful ship, and reach the highest tier of Fame. Career mode can be played either alone in singleplayer or with up to three other people in multiplayer.

Cosmoteer offers two ways to increase or decrease the difficulty of Career mode, in order to better tailor the experience to suit the player. The first way to modify a Career Mode's difficulty is by changing the Combat Difficulty, which affects how much damage you deal to enemies, and how much damage enemies deal to you.

The other way to modify Career Mode's difficulty is through the Economic Difficulty setting. This affects how fast the player moves through the game, by modifying the resource drop rates, money rewards, fame rewards and resource selling price.

Both Combat difficulty and Economic Difficulty can be modified at any time throughout the playthrough of a Career Mode game. Simply open the Settings panel in the middle of the game, navigate to Current Game > Difficulty, and make the desired change. 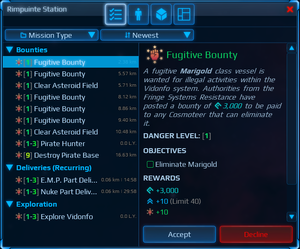 An example of the missions one might see throughout gameplay.

When playing Career Mode, the basic objective is to complete missions in order to gain fame and resources. Stations play an integral role in the gameplay of Career Mode, and when hailed, they allow you to accept missions, trade resources, hire crew and purchase Blueprints. They are regularly visited by Trade Ships, which restock the station with resources and can be hailed for trading and hiring crew.

There are several different types of missions that can be accepted, and they can be characterised as Bounties, Faction Conflict, Deliveries and Exploration.

Design ships with unlimited credits and all blueprints unlocked.

In Creative Mode players can design ship with unlimited credits and resources, and with all blueprints unlocked by default. Saved ship designs can be loaded at any time for testing or roleplaying. By default galaxies generated in Creative Mode will feature Sun|Suns, Planets, Moons, and Hyper-Jump Relays, however they can be disabled if desired.

A fight to the death! The last surviving player or team wins!

Earn points by damaging and destroying other players! You will respawn when destroyed.

Capture control points to earn credits and use those credits to warp in new ships. Achieve victory by capturing all control points!

Retrieved from "https://cosmoteer.wiki.gg/wiki/Game_Modes?oldid=733"
Cookies help us deliver our services. By using our services, you agree to our use of cookies.